If you’re new to the world of online poker, or if you’ve been playing for a while but still aren’t up to scratch on your poker etiquette, you may feel a little out of your depth. Poker etiquette is something that you have to get right in order to have the best experience, and to get on with your fellow players. You may already know the basics of how to play poker, but if you’re unaware of the unwritten rules when at the table, you could end up looking like an amateur, or annoying other players. This can be frustrating and can also lead to your game being ruined by players that doubt your poker playing skills. This article will focus on poker tips for good etiquette at the table. 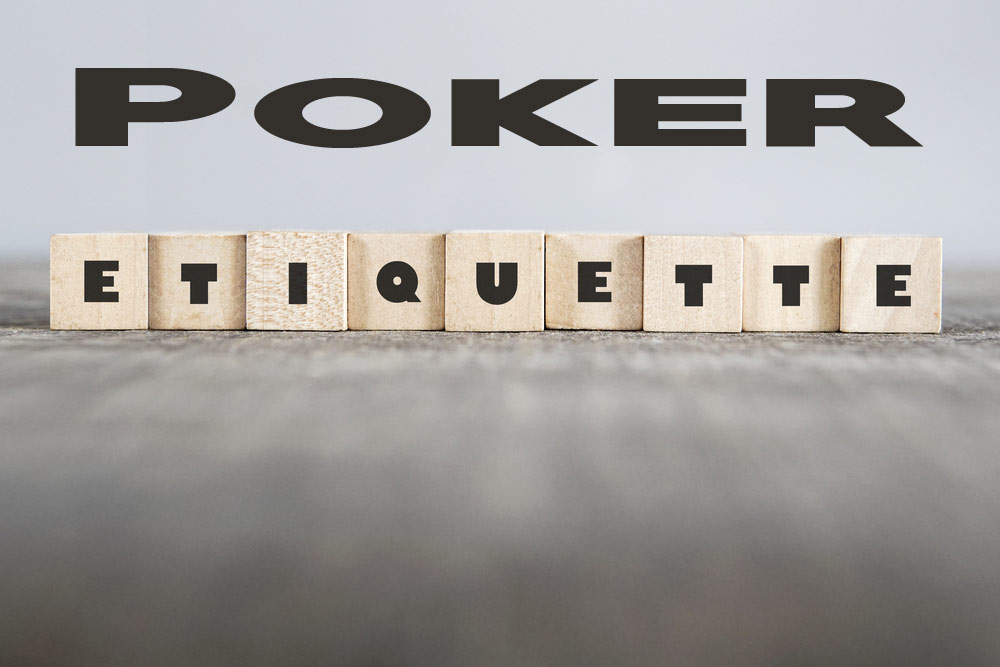 Keep Quiet If You’re Not Playing A Hand

If you’ve decided to fold and are no longer playing a particular round, it is very important that you keep your thoughts to yourself as the other players finish the round. Never attempt to give advice to any other players or discuss their hand while you are out of the game, if you do, you’re likely to end up very unpopular.

Keep Foul Language To Yourself

If you are playing with friends at home, then using foul language may be a different story. However, if you are playing online and swearing at players in the chat or being abusive towards them, then you might end up alone on the table. It is very common for players to leave if they are on a table with an abusive player, it ruins the game for everyone involved. Furthermore, if you allow yourself to get wound up and become abusive, then it is likely that your own gameplay will be affected. Many angry players end up putting themselves on tilt out of frustration, (or just to spite other players), and this isn’t helpful.

Be Quiet About Your Folded Hands

Many players use the chat feature to take out their frustration on the game. This often means that players will declare the hands they have folded while still watching the game progress. This is a very inconsiderate thing to do as it can ruin the gameplay for other players that are still in the game. For example, if you announce that you folded an ace and another player in the game is all in with an A-9 against JJ then this is very unfair and will likely earn you a very bad reputation.

Be Alert And Part Of The Game

In online poker, it is very common for players to play on several tables at the same time, this is all well and good if you are paying attention. Frequently, players can be sat on a table waiting for an opponent’s countdown clock to go all the way to zero before their hand is automatically ‘checked’. This is usually because the player’s attention is elsewhere. Most players like each round to go as quickly as possible and usually check/fold/bet/raise within seconds of their turn. Leaving other players on the table waiting around because you’re not focused on the game is very irritating, and it can also be very detrimental to your play. If your focus is elsewhere, then you are likely to make bad decisions, it’s usually best to stick to one or two tables at a time.

Don’t Be A Sore Loser

Sore losers are very prominent in the world of online poker, mainly due to the anonymous nature of the chat feature. Sore losers will often take to the chat box to bad-mouth the play of other players, simply because they lost to them. Being a sore loser is incredibly immature and is likely to get you a bad reputation amongst other players. Always remember that poker is a game, yes there is money on the line but at the end of the day, it’s a game and there will always be winners and losers in any type of game. If you lose, try to take it well, because your next big win may be just around the corner.

Be A Good Winner

In addition to being a sore loser, being a bad winner is also a very unattractive trait to have. Boasting about your win and belittling the actions of other players is equally as childish as being a sore loser. In fact, it may even make you more unpopular, and make other players think twice about playing against you. Never brag about your win or try to make others feel bad about losing, as you could very easily find yourself on the receiving end of such abuse as you lose all your money to that same player in the next hand.